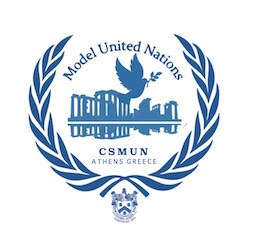 Defendants:  – To be announced

Prosecutors: – To be announced

The Trial is to be announced

The International Criminal Court (ICC) investigates and, where warranted, tries individuals charged with the gravest crimes of concern to the international community: genocide, war crimes, crimes against humanity and the crime of aggression.

The Presidency  is composed of the President and First and Deputy President in CSMUN, who are elected by an absolute majority of the Judges of the Court for a three year renewable term. The Presidency has three main areas of responsibility: judicial/legal functions, administration and external relations.

The Registry is a neutral organ of the Court that act as a secretary to all other organs so the ICC can function and conduct fair and effective public proceedings. The Registry provides judicial support, external affairs and management.

For the purposes of the CS ICC we will have four advocates, two for each party. The advocates act as independent lawyers supporting their client. The Prosecutors must determine whether there is sufficient evidence of crimes of sufficient gravity falling within the ICC’s jurisdiction to bring the case before the Court and has the burden of proof.  Also, we  have the Defendant Party which supports or defends the accused.

The ICC’s 18 judges are elected by the Assembly of States Parties for their qualifications, impartiality and integrity, and serve 9-year, non-renewable terms. They ensure fair trials and render decisions, but also issue arrest warrants or summonses to appear, authorize victims to participate, order witness protection measures, and more. They also elect, from among themselves, the ICC President and two Vice-Presidents, who head the Court.